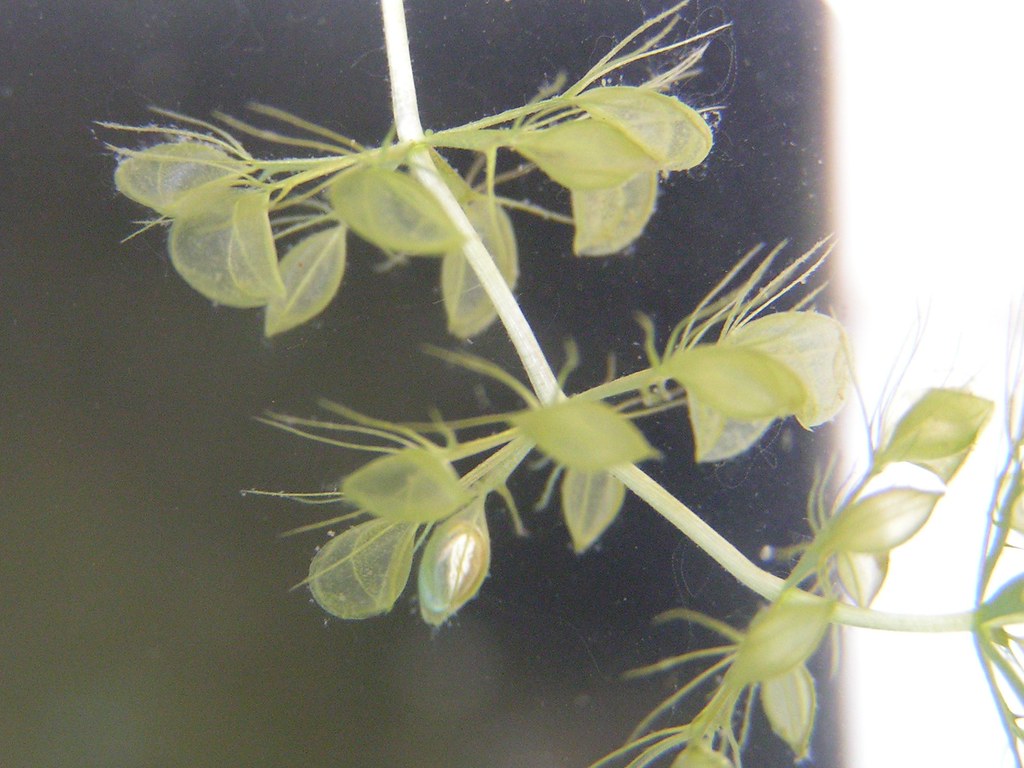 The waterwheel plant is native to Europe, Asia, Africa and Australia, but they are becoming increasingly rare. It’s the sole species of the genus, although 19 extinct species are known, through fossil records.

This fast growing, aquatic, rootless plant consists of free-floating stems reaching a length of 6–40 cm (2–16”). It naturally grows in ponds and lakes of clear acidic water that’s low in nutrients. It is one of the few carnivorous species to deploy active traps to catch its prey, that being small aquatic creatures.

Traps look similar to those of the Venus flytrap but much smaller, at just 2-4mm they are about a tenth the size. They contain an air sac to aid flotation and are arranged in a series of 5 to 9 concentric circles on a central stem, hence its name. Each trap is surrounded by bristles to prevent triggering by water debris. They will not function unless the water temperature is at least 20C (68F).

Activated by its prey touching fine trigger hairs on the surface of the trap, it rapidly closes in just 0.02 to 0.1 seconds, around 10 times faster than the Venus flytrap. The trap does not change shape when it shuts, but rather closes like two halves of a mussel shell, unlike the Venus flytrap which flexes its leaves from flat to curved when it shuts to encase its victim.

In warmer conditions, the waterwheel will produce white flowers that break through the surface to attract pollinating insects. They only last a few hours before sinking back below the surface to facilitate seed production.

At the onset of winter, the plant produces tight buds which sink to survive freezing temperatures. In spring, the buds rise to form new plants.

Waterwheels are best propagated from cuttings that are at least 3 nodes long. Seeds can be slow and need steady conditions. Always use rainwater.

See it in action here

Carnivorous plants have ingeniously evolved a variety of mechanisms to survive in extreme conditions. With the ability to catch their...
Carnivorous plants come from a range of climates from the tropical areas of Asia to the temperate regions of Europe...
Nepenthes are a genus that contains around 170 species and are very diverse. They are native to the tropics, principally...
Cephalotus is only native to the breezy coastal districts of southwest Australia, mainly between the towns of Albany and Walpole...
Darlingtonia is native to the USA, in northern California and southern Oregon. It is the sole member of its genus...
Bladderworts are the largest genus of carnivorous plants with around 220 species and are widely distributed around the world. They...