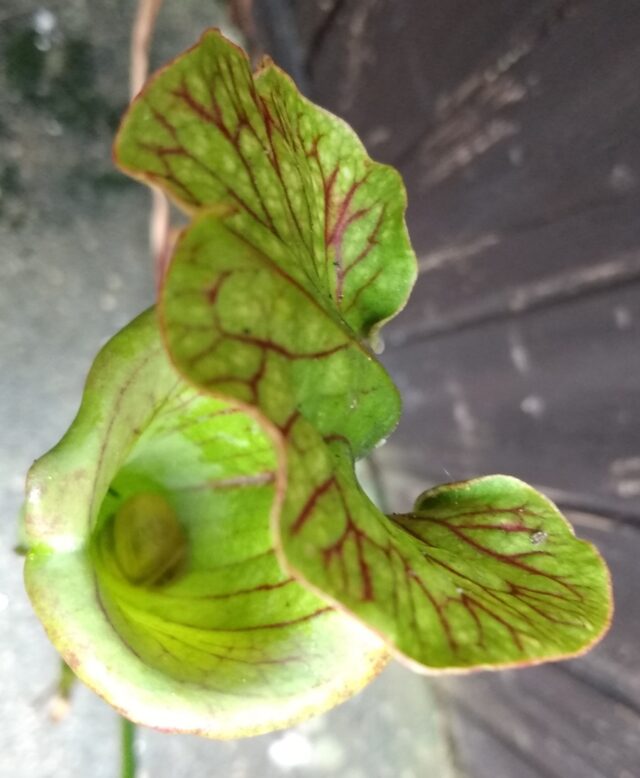 Carnivorous plants have ingeniously evolved a variety of mechanisms to survive in extreme conditions. With the ability to catch their prey they don’t have to rely on their immediate environment alone to obtain nutrients, unlike more traditional plants.

Usually, you think of insects as having the upper hand over plants. As a keen vegetable grower, I experience this issue every year. Watching my crops being ravaged by various flies, aphids, beetles etc. Of course, it doesn’t stop at insects with their trail of destruction… slugs, snails, rodents, cats, birds… aggghhhh!!

Unfortunately, carnivorous plants are not immune to attacks from insects and other critters. It is believed, certain plants try to attract specific prey via scent, colour and nectar. However, to a large extent, carnivorous plants don’t have much control over what they actually catch.

My Sarracenia’s have particularly suffered from ‘revenge’ attacks over the years. The tell-tale holes in the pitchers give evidence. Unless you see a slime trail it’s hard to know what was responsible for the damage. I’ve read about wasps, beetles, earwigs and other larger insects being capable of either chewing or cutting their way free. Younger pitchers are especially vulnerable due to their thinner walls.

I tend to find the taller funnel shape pitchers like those of Sarracenia alata less prone to damage in this way. This may be due to their height so they mainly attract flying insects. Additionally, once caught, the insect is restricted in its movement as it reaches the bottom, making escape more difficult. If there are already a number of insect husks inside, the risk of escape is greater. My Alata caught loads of wasps last summer with no issues of pitcher damage.

My Sarracenia purpurea has suffered more, which doesn’t have the same funnel shaped pitchers. This pitcher plant relies more on drowning its prey but it can dry out in the summer months. Therefore, I make sure there is always a little rainwater in each pitcher to reduce the risk of escape damage.

Insect larvae can also be a problem, such as from moths. Inspect your plants regularly for any evidence of eggs. Slugs and snails can also be an issue. It never stops amazing me the lengths a snail will go to, to find a cool, moist location, out of site. Climbing over 2ft up a slender pitcher on my Sarracenia alata, I have to be impressed. However, I don’t trust it! I find the easiest way to remove it is by turning the pot upside down and gently loosening the snail’s grip. Carnivorous plants are certainly not slugs and snails’ meal of choice. However, if I see any slime trails, I try and locate and remove them. This is easier said than done as they can be frustratingly clever at hiding, not good if you suffer from anxiety

Carnivorous plants come from a range of climates from the tropical areas of Asia to the temperate regions of Europe...
The waterwheel plant is native to Europe, Asia, Africa and Australia, but they are becoming increasingly rare. It’s the sole...
Nepenthes are a genus that contains around 170 species and are very diverse. They are native to the tropics, principally...
Cephalotus is only native to the breezy coastal districts of southwest Australia, mainly between the towns of Albany and Walpole...
Darlingtonia is native to the USA, in northern California and southern Oregon. It is the sole member of its genus...
Bladderworts are the largest genus of carnivorous plants with around 220 species and are widely distributed around the world. They...