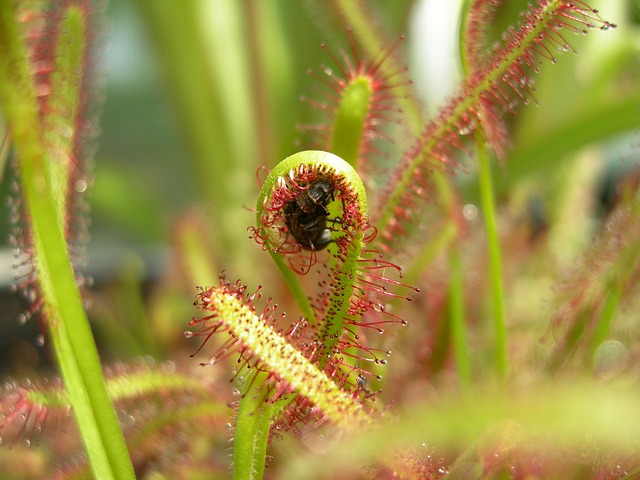 Sundews are native to every continent apart from Antarctica. The genus is among the largest of all carnivorous plants with around 200 known species. They grow in various habitats in nutrient deficient soils and come in diverse shapes and sizes. Sundews come in prostrate or upright rosettes between 1 and 100 cm (0.39 and 39.37 in) in height, depending on the species. Climbing varieties grow larger still and form vine-like stems up to 3m.

Sundews are characterised by modified leaves covered with fine red tentacle like hairs that secrete a sticky mucus for catching their prey. In many species, once trapped, the leaves curl towards their victim for increased contact. Enzymes contained in the mucus are then utilized for digestion. A few days later, once this process has elapsed, the leaf will slowly uncurl and more mucus will be secreted, ready for its next meal.

Like several other species, they produce flowers on long stems. The long stems are believed necessary to reduce the risk of pollinating insects becoming their next meal.

Most sundews enter a period of dormancy during the winter. An exception is the subtropical species. These maintain vegetative growth year-round under near uniform climatic conditions.

They can be grown in a mix of half composted bark and half washed sharp sand and should stand in a saucer of rainwater. Temperate varieties require a temperature of approximately 18-25C (66-80F), during the growth period. A humidity of at least 50% is desirable. In winter they need to be kept cool, but above 0C. The soil should be just kept damp and any dead foliage removed.

Propagation is from seeds and by leaf or root cuttings.