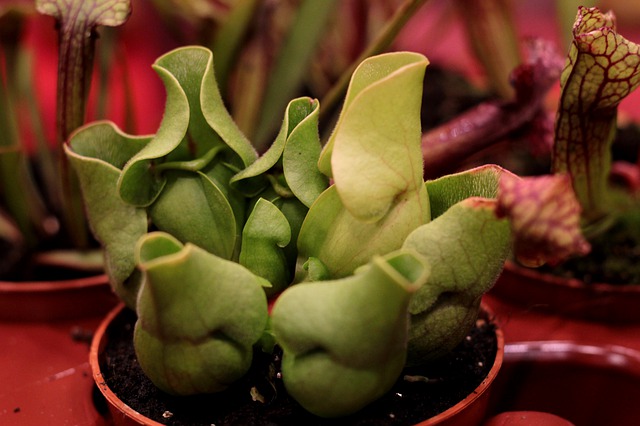 Sarracenia belongs to a genus of 8 recognised species. They are native habitat to North America, primarily the eastern see-board and northern USA as well as south-east Canada. They grow along coastal plains and sunny open wetlands. These habitats are under attack due to drainage to facilitate urban developments. They are therefore becoming increasingly rare.

The plant itself comes in diverse forms. Some with horizontal ground level pitchers, others with long vertical pitchers 3ft tall. Colours vary from light yellow through green to purple. Flowers are formed from early spring to midsummer.

The traps are leaves modified into pit-like structures with downward pointing hairs to direct prey to the trap opening. The lip of the trap is usually slippery and the inside waxy. Many species have nectar secretions (some contain toxins), bright colours or an alluring scent to attract prey.

The unwitting prey is tempted further and deeper into the pitcher until it slips. The funnel shape of many Sarracenias restricts the insect’s movement making escape virtually impossible. They will then most likely starve or in open-lid varieties, drown.

Sarracenias can be grown indoors and require good light to thrive. Bright sunlight in a windowsill is not advisable as the pitchers may scorch. Stand the containers of equal parts composted bark and washed sand in a saucer of rainwater. Maintain a high level of humidity in summer. Most of the year I keep mine next to my garden pond. The taller varieties are best kept in a cool greenhouse to protect from windy conditions.

In winter, sarracenias need to have a period of dormancy, so several weeks spent in temperatures between 0°C (32°F) and 15°C (60°F) will help encourage strong growth the following year. The soil should just be kept damp. Dead foliage may be removed once they have fully died back.

Propagation can be achieved from seeds or rhizome cuttings. Division is best in early Spring. Repot every two years but don’t be generous with your new pot size as this can negatively impact future growth. Sarracenias are efficient insect catchers but to achieve the biggest pitchers they need to stay hungry!